Some hormones control the growth of all bodily tissues, regulates sperm production in men, stimulates ovulation in females, regulates milk secretion after delivery, regulates the amount of water in the blood, etc.
Do you know the secretion of these hormones is controlled by a single gland present at the middle of the skull base? Since this gland controls many of the other endocrine glands, it is called the master gland. The name of the gland is pituitary.
Important!
The ectoderm of the embryodevelops the pituitary gland. The pituitary gland is located in the middle of the skull base, in a bony structure called sella tursica. Location of pituitary gland
It is attached to the hypothalamus by a stalk called the infundibulum. It's behind the nose, just beneath the hypothalamus, a portion of the forebrain. Its approximate weight in an average adult human being is \(0.5\) g. 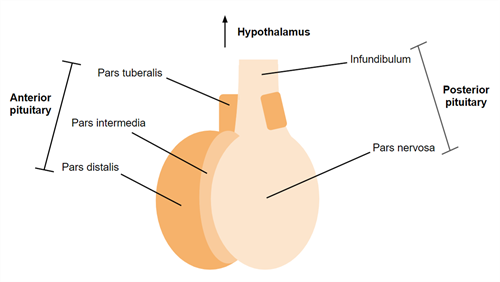 Anterior and posterior pituitary
A. Hormones of the anterior lobe
The pituitary glands anterior lobe secretes the following hormones, the majority of which are trophic hormones. 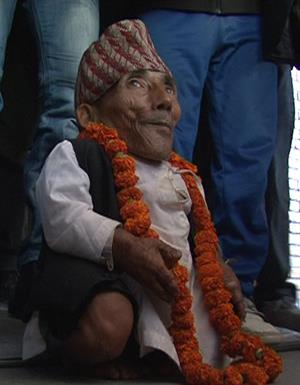 A person affected by dwarfism
Gigantism
Gigantism is a condition caused by excessive growth hormone release throughout childhood. Bones stretch beyond their natural limits, resulting in extremely long heights. A person affected by gigantism
Acromegaly
Acromegaly is a condition caused by an adult's overproduction of growth hormone. It's characterised by an abnormal increase in the size of the bones in the face and limbs.

Left to right: Sultan Kosen & other persons are affected with acromegaly
Diabetes insipidus
Diabetes insipidus is a kind of diabetic disease that affects the kidneys. It is caused by an \(ADH\) (Antidiuretic hormone) deficit.  It is characterised by the excretion of large amounts of dilute urine.