8. Monohybrid cross – Inheritance of one gene 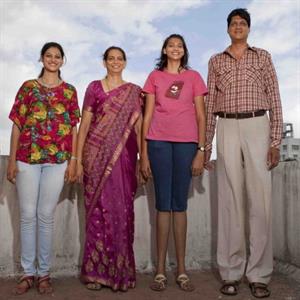 India's tallest family
This family depicts the laws of genetics that if parents are tall, their offspring has higher possibilities of being tall. What if a tall male marries a short female? This crossing with only one contrasting character is called a Monohybrid cross, which Gregor Mendel experimented with using pea plants.
Monohybrid crosses involve the inheritance of only one pair of contrasting characters.
The monohybrid experiment refers to the crossing of two plants that differ in one character. Mendel chose two pea plants, one with a tall stem and the other with a dwarf or short stem. These plants were considered parental plants (\(P\)) and were used for pure breeding. For example, a cross between tall and dwarf plants is between two forms of a single trait.
Important!
A pure plant is bred true in terms of a specific trait for several generations. The pure breeding tall plant was chosen from a stock that had produced tall plants for many generations. Pure-bred tall and dwarf plants were used as parents and crossed. This crossing is accomplished by first removing a young flower's male parts (anthers) from a tall plant. After that, the flower is wrapped in a small paper bag. The pistil of this flower was dusted with pollen from the dwarf plant as it matured. Seeds collected from these plants were planted, and a group of plants grew from them. Monohybrid cross
Genotype and phenotype:
The tall parent's genotype is \(TT\). The dwarf parent's genotype is \(tt\), while the \(F1\) generation plant's genotype is \(Tt\).
A genotype is the genetic expression of an organism.
(or)
A genotype refers to a plant's or animal's genetic makeup or gene content.
Phenotype refers to a plant's or animal's external visible appearance.
In the \(F2\) generation \(3\) distinct types were obtained:
There are three genotypically distinct types of plants in Mendel's \(F2\) generation. They are \(25\)%  \(TT\) (homozygous), \(50\) % \(Tt\) (heterozygous), and \(25 \)% \(tt\), respectively (homozygous). Because it depends on the genetic makeup of individuals, this ratio is known as the genotypic ratio. Hence the genotypic ratio is \(1:2:1\).
Phenotype is known as the external expression of a specific trait. It excludes the unexpressed traits caused by recessive genes. The \(F2\) generation in Mendel's experiment has two types of plants phenotypically. They are both tall and short. The tall and the dwarf are observed in a
\(3:1\) ratio. The ratio is known as the phenotypic ratio.
Hence the phenotypic ratio is \(3:1\)
Important!
Johannsen coined the terms genotype and phenotype.
Mendel stated that each organism consists of a set of characteristics. ''He denoted that a pair of factors or determiners determine each character''. These factors are now known as genes. A gene determines an organism's biological characteristics. It serves as a functional unit of heredity. So a gene is a unit of \(DNA\) that is responsible for a character's appearance and inheritance.