Punnet square:
A video explaining the basics of punnet square
The four possible combinations in the \(F2\) generation are clearly understood when the gametes are placed in a Checkerboard or Punnet square.
Important!
Punnett square is a checkerboard form invented by R.C.Punnett, a British geneticist, to study genetics. It is a graphical representation used to calculate all possible genotypes of offspring from a genetic cross. Mendel's first law of segregation of characters using monohybrid cross
Homozygous and Heterozygous:
An individual is said to be homozygous (homo - similar; zygous - pair) for a specific character when the paired genes controlling that character are similar or identical, i.e. the zygote carries similar or identical factors that are responsible for character expression.
In Mendel's experiment, the tall parent (\(TT\)) is homozygous dominant, while the dwarf parent (\(tt\)) is homozygous recessive.
A person is said to be heterozygous (or hybrid) for a particular trait when the paired genes controlling that trait are dissimilar, i.e., the zygote carries dissimilar or non-identical factors responsible for a character's expression.
In Mendel's experiment, the \(Fl\) plant (\(Tt\)) is heterozygous. Only the dominant gene expresses its character in the heterozygous condition, and thus the plant is tall.

Homozygous and Heterozygous
Alleles or allelomorphs:
A video explaining the genes and alleles
According to Mendel, each alternative of character is controlled by a gene. Example illustration of locations of genes and alleles
Example:
Tallness is controlled by gene \(T\), while dwarfness is controlled by gene \(t\). The two genes (\(T\) and \(t\)) that represent the two alternatives (tall and dwarf) of a specific character (height) are found on two different chromosomes (homologous chromosomes). These genes are found in the same locus on the homologous chromosomes.
\(Tt\) is the gene content of the \(F1\) plant. These two genes are referred to as alleles because they are found in the same locus of a homologous chromosome. So, \(T\) is allelic to \(t\) or vice versa.
The factors are always pure, and when gametes are formed, the unit factors segregate, resulting in each gamete receiving one of the two alternative factors. It means that the factors for tallness (\(T\)) and dwarfism (\(t\)) are distinct entities and that in a gamete, either \(T\) or \(t\) is present. When \(F1\) hybrids are self-crossed, the two entities separate and reunite, resulting in tall and dwarf plants. 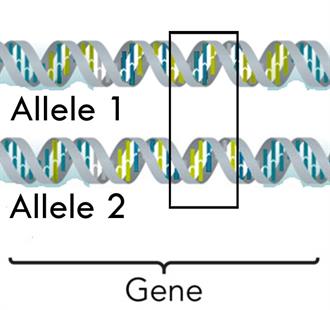