Have you ever wondered how a camel can run so fast in the desert? Why is the edge of the cutting tool so sharp? Why is it that a truck's tyres are so much wider? Why is it that an army tank is supported by a continuous chain?
Let us find the answer to these questions.
In order to understand the phenomenon involved in the above questions, we should know what thrust and pressure are.
Thrust:
The force that acts on an object perpendicular to the surface is called thrust. The unit of thrust is Newton(\(N\)).
Pressure:
The force acting per unit area is pressure. It is mathematically written as
The unit of pressure is . In honour of french scientist, Blaise Pascal, the SI unit of pressure is called pascal, denoted as \(Pa\).
Pressure due to liquid,
The above expression shows that the pressure in a liquid column is determined by depth(\(h\)), liquid density(), and gravity acceleration(\(g\)). However, the term area A is absent from the final expression for pressure. As a result, pressure in a liquid is simply determined by its depth.
Consider a situation,
If you tried to pierce the wood with a blunt nail, nothing would happen. If you applied the same force to the sharp nail, it would easily penetrate the wall. This demonstrates that pressure is determined by more than just force; it also depends on the area. The area of contact for a sharp nail is very small, so the entire force concentrates at a single point, allowing the nail to pierce the wood; however, the area of contact for a blunt nail is much larger than for a sharp nail, making it difficult to penetrate the wall. Piercing nail into wood
Now, let us answer all the above questions.
The sharp-edged knife cuts the vegetable easily than the blunt one, because the surface area of the sharp knife is less, so it would exert high pressure. 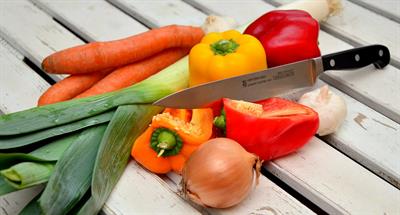 Cutting the vegetables
Camels can walk easily in the desert because of their wide feet. Their broad feet allow the force of their body to act on a larger surface on the land, reducing the pressure exerted on the land by the camel. We can say this as we know that pressure exerted and area are inversely proportionate. So, the feet of the camel will not sink into the sand. Thus, it can walk easily.
Previous theory
Exit to the topic
Next theory
Send feedback
Did you find an error?
Send it to us!