Inside view of an atom bomb
The cylinder is injected into the void with a conventional explosive when the bomb has to be detonated. The two pieces of fissile material are combined to produce a supercritical mass for the explosion.

Atom bomb explosion
A region of extremely high temperature and pressure is generated in a fraction of a second, accompanied by the emission of dangerous radiation like gamma rays that harm living creatures.
In \(1945\), during World War II, atomic bombs of this type were dropped on Hiroshima and Nagasaki in Japan. The nuclear bomb dropped on Hiroshima was called 'Little boy'. It was a gun-shaped bomb with a uranium core. 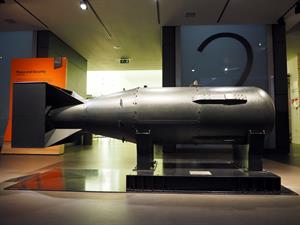 Model of 'Little boy'
The bomb that was dropped over Nagasaki was named 'Fat man'. It was an explosion type bomb with a plutonium core. 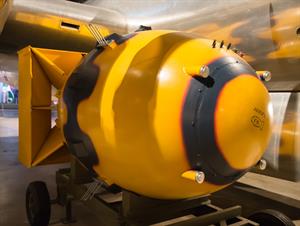 Model of 'Fat man'
Reference:
https://live.staticflickr.com/2823/11374698284_c24bb8d056_b.jpg
https://upload.wikimedia.org/wikipedia/commons/7/74/Atom_Bomb_Nuclear_Explosion.jpg
https://upload.wikimedia.org/wikipedia/commons/0/04/Spare_Little_Boy_atomic_bomb_casing_at_the_Imperial_War_Museum_in_London_in_November_2015.jpg
Previous theory
Exit to the topic
Next theory
Send feedback
Did you find an error?
Send it to us!