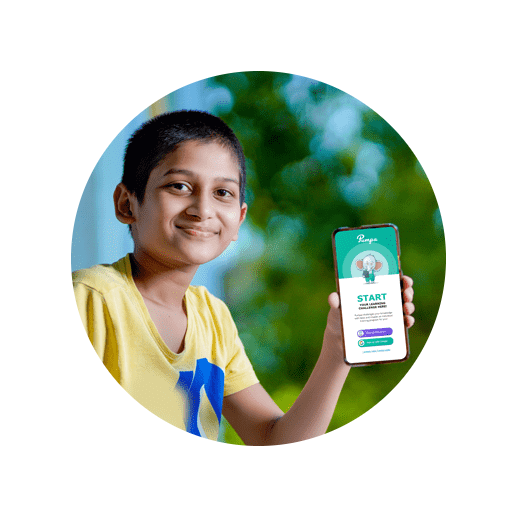 In lower organisms such as protozoans, nutrients and other materials are transported to the different parts of the cell is by means of diffusion. 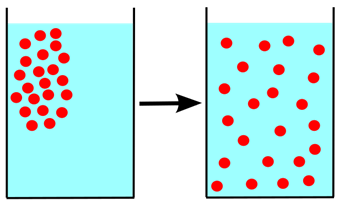 Diffusion of substances from higher to lower concentration
But in higher multicellular organisms, nutrients transfer across different parts of the organism is not possible by means of diffusion. So, a special transport system is in place for these organisms called a circulatory system. In this object circulatory system of the rabbit is explained. Structure of rabbit heart
Terms related to the circulatory system:
Blood, blood arteries, and the heart make up the circulatory system. The heart is pear-shaped and sits between the lungs in the thoracic cavity. Pericardium, a double-layered membrane, surrounds it.
The external and internal structure of the heart:
The heart is located in the middle space, somewhat to the left side of the thoracic cavity, between the two lungs. The heart is a muscular, four-chambered, pear-shaped pumping organ. The sharp apex of the heart points backwards, while the broad base points forward. Cardiac valves of mammals
Ventricles:
Like the auricles, ventricles are divided into two chambers. An interventricular septum separates the right and left ventricles.
The pulmonary trunk emerges from the right ventricle, carrying deoxygenated blood to the lungs. The systemic arch (aorta) emerges from the left ventricle, supplying oxygenated blood to all regions of the body.
Three semilunar valves protect the openings of the pulmonary artery and aorta.
The working mechanism of the heart:
Throughout the life of the rabbit, the heart functions as a force pump, beating continually. It operates as a suction pump, sucking blood into the auricles while pumping blood into the arteries from the ventricles. The auricles contract, and the ventricles relax or dilate during heartbeats, and then the auricles relax and the ventricles contract.
Contraction and relaxation happen at the same time. Systole is the contraction, and diastole is the relaxation. The heart muscles are of the cardiac type, which has a natural tendency to beat continuously.
Through precaval and postcaval veins, the right auricle gets venous or impure blood from various areas of the body. Through pulmonary veins, oxygenated or pure blood is sent to the left auricle. The contraction of the auricles forces venous and oxygenated blood into their respective chambers of the ventricles. 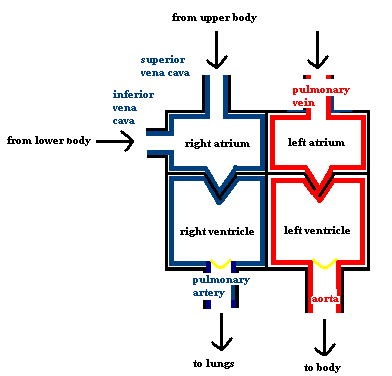 Circulation of blood in mammals
Then, a bit later than the auricles, the ventricles contract. The tricuspid and bicuspid valves close the right and left auriculo-ventricular openings when the ventricles begin to contract. As a result, blood cannot return to the auricles.
The aortic arches semilunar valves are still closed, and blood flow is impeded in all directions, increasing blood pressure inside the ventricles. When this pressure exceeds the arteries, the aortic arches' semilunar valves open, forcing blood into them.
Thus, oxygenated blood from the left ventricle travels to various areas of the body, while venous blood from the right ventricle travels to the pulmonary aorta, where it is oxygenated. The ventricles then relax, and the auricles fill with blood once more.
A heart's complete contraction (systole) and relaxation (diastole) is called a heartbeat or heart cycle.