3. The Paintings of the Pandyan Era

The Importance of Sculptures:
The Pandyan architecture gave critical importance to sculptures which was a unique feature among the architectural styles of their contemporaries. The advent of Buddhism and Jainism played a critical role in the development of architecture. Kalugumalai sculptures
The temples which built under the Pandya reign accommodated several sculptures around the premises, while the sanctum and sanctorum are free from sculpted images.
Monolithic temples and cave temples were prevalent among the Pandyan architecture.
Panchayatana cult: The cult of building caves with five deities are known as the Panchayatana Cult. This type of cave is found in Thirupparankundram which was built by the Pandyan rulers.
The Kalugumalai temple (Vettuvan Koil) remains the only remaining example of the Pandyan Monolith art. The styles of Pallavas heavily influenced the dressing patterns of the sculptures present in this temple. Rashtrakutas and Chalukyas.
Paintings under the Pandyas:
The Pandyan kings gave equal patronage in developing the art forms during their rule. Though many paintings found in various caves had been lost or damaged for various reasons, some paintings had stood the test of time.
Some of the notable contributions from the painters of the Pandyan period are still seen in caves of “Thirumalapuram and Sittanavasal”.
Thirumalapuram paintings:
The early Pandian paintings can be witnessed in Thirumalapuram, which is located in Tirunelveli. Representations of small deities and a mythical lion image was seen on the roof of the rock-cut cave.
The paintings also display a wide range of colours that had been used to differentiate the pictures. Colours like Indigo, White and Black were frequently used in the paintings.
Sittanavasal Cave paintings (Pudukkottai):
The Jains and Jainism were prevalent during the Pandyan period as most of the Pandyan rulers were patrons of Jainism. The Sittanavasal cave temples serve as the important residing place of the Jain monks.
Eladipattam: This is a hill above the Sittanavasal cave where the Tamil Brahmi script with Vatteluttu dating back to the \(10^t\)\(^h\) century is found.
The walls of the Sittanavasal cave are decorated with Fresco and Mural paintings. It contains images of various flowers, devotees, ponds etc. 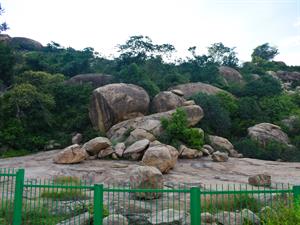 Sittanavasal Caves
Most of the paintings of Sittanavasal belongs to the \(9^t\)\(^h\) century; among them, the most attractive painting was that of a “Lotus Pond”, where the entire pond is covered with lotus, Goose, devotees and buffaloes were painted with enchanting colours.
Samava-sarana: This is an audience hall where the Tirthankaras of the Jain cult gave their sermons after attaining the Kevala Jnana or the Supreme knowledge. This scene has been depicted in Sittanavasal caves.
The paintings present in the Sittanavasal have their resemblance to the cave paintings that are seen in Ajanta and the Bagh caves.
Reference:
Sittanavasal Caves - ELAMARAN ELAA PHOTOGRAPHY / Shutterstock.com
Previous theory
Exit to the topic
Next theory
Send feedback
Did you find an error?
Send it to us!