4. The Rocky Mountain and the Great Plains

The western region of the continent is made of long ranges of young folded mountains. The well know of these mountains are probably the Rockies, North America’s largest chain mountain. It is also interspersed with high plateaus, narrow valleys and broad interior basins.

The Rockies are a part of a long series of parallel mountain ranges known as the Cordilleras. Sierra Nevada mountain range is in the Western United States between the Central Valley of California and the Great Basin.

In Mexico, they are known as the Sierra Madre. Sierra Nevada or Sierra Madre is a part of Cordilleras. Together with the Coast Range, Rockies are called the “Western Cordilleras.“ Some of the high intermontane plateaus found in these ranges are the Mexican plateau, the Colorado Plateau and the Columbian plateau.

The Cordilleras are a part of the "Pacific ring of fire" because several active volcanoes are present here, and this region is also prone to frequent earthquakes.

The Ring of Fire or Pacific ring of fire is a region in the pacific ocean, home for over 450 volcanoes, including three of the world’s four most active volcanoes. 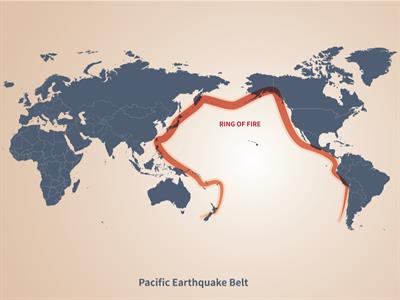 The Ring of fire

The Great Plains:
The Great Plains is suituated in the middle of the continent. To the east of the Rockies and the west of the Appalachian Mountains, one can find this massive landform. They are aptly named as the great plains of North America. It covers about \(60%\) or three-fifth of the continent.
These plains are marked by its deep, rich soil in Canada & USA. The fertility makes them suitable for growing grains that feed a larger part of the world. Hence, they are called as “Breadbasket of North America”.
The western portion of the plain is called the High Plains spreading roughly over the foothills of the Rockies. Western Highlands is the source for most rivers in this region, and the plains generally slope eastwards and southwards. They are drained by rivers like the Mississippi and the Missouri.
Previous theory
Exit to the topic
Next theory
Send feedback
Did you find an error?
Send it to us!