South America is rich and diversified wildlife because of a wide range of habitats such as dense forests, swamps and rivers.
Particularly the Amazon basin has rich flora and fauna. More than \(1,500 \)types of birds are found in the continent, including Condor - the largest bird prey, Rhea - the flightless bird (much like the ostrich of Africa).
Other birds like Toucans, Macaw, Hummingbirds, Flamingoes and different type of parrots are also found here.

Condor - The largest bird prey
As it is historically isolated from the rest of the world, the South American landmass is marked by considerable biological originality. Many animals are exclusive groups, and even at the family level, the percentage of endemic forms is high. 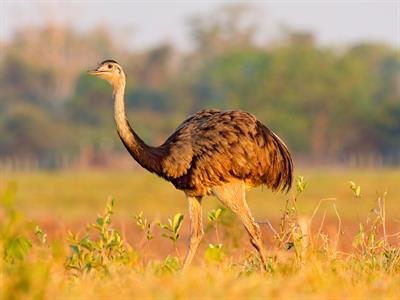 Rhea - The flightless bird
The forest is home to a variety of monkeys like spider monkeys, howler monkeys, owl monkeys and squirrel monkeys.
The Anaconda, which is shown as deadly snakes in the movies, is also found here. At up to \(250\) kilograms, the green Anaconda is the largest snake in the world.
Ancient madammals (Mammals is an abbreviation of madammal) such as anteaters and armadillos are found in South America. Llamas are animals typically found only in South America.
The rivers of South America have a wide variety of fish. The Piranha found in the Amazon is a fierce flesh-eating fish. Llamas
Previous theory
Exit to the topic
Next exercise
Send feedback
Did you find an error?
Send it to us!