4. The Bhakti Movement in North India

The proliferation of the Bhakti Cult:
The Bhakti cult saw its spread among the people of North India as it was reeling under the dominance of Islam. The Bhakti Saints began to take their ideas with them during their travels across India.
Many Bhakti proponents took the ideals from various religions, especially Islam, which was not accepted by other groups of Bhakti saints, who do not want any new inclusions from other religions.
Some of the important proponents of the Bhakti movement in North India had been discussed below.
1. Ramananda:
Ramananda was born in Allahabad and was inspired by Ramanuja, who was the greatest exponent of Vishishtadvaita. Ramananda was instrumental in the spread of the Bhakti movement in India.
He was the first person to spread the ideals of Bhakti in Vernacular language, which took the ideals to common people.
He was a social reformer who opposed the caste system and took his disciples from various castes.
2. Vallabhacharya:
He belongs to the Vaishnava sect in Andhra, who played a pivotal role in spreading the tenets of Vaishnavism in the North and the Western Part of India. Vallabhacharya
He established his philosophy called the “Pushtimarg” in the \(16^t\)\(^h\) Century. He also went on to build a temple for Lord Krishna in Mathura.
Surdas: He was a poet, philosopher and musician born as blind in a Brahmin family. He was a great devotee of Lord Krishna. He took his lessons under the great sage Vallabhacharya. Surdas also wrote poems named “Sur Sagar”, meaning the “Ocean of Melody”.
3. Chaitanyadev:
He was a great Saint and reformer of Bengal who played a crucial role in spreading Vaishnavism in Eastern India. He believed that a person could feel God by singing and dancing to devotional songs.
Mirabai: She was the queen of Rajasthan and was a sheer devotee of Lord Krishna. Post the death of her husband, she followed Ravidas and became his disciple. She is also known for her Bhajans of Lord Krishna.
4. Tukaram:
He was a Bhakti Saint of Maharashtra who belonged to the \(17^t\)\(^h\) century and was believed to be a contemporary of Shivaji Maharaj. He was also known as “Sant Tukaram or Bhakta Tukaram”. 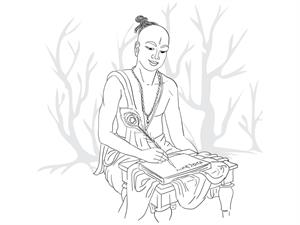 Tulsidas
The songs composed by Tukaram were known as “Abhanga’s” (Devotional poems), which were devoted to Vithoba or Viththala, an incarnation of Lord Vishnu.
Tulsidas: He was a patron of Lord Rama (an incarnation of Lord Vishnu), which made him compose his version of the Epic Ramayana in Hindi, which was originally written in Sanskrit. The translated version was named “Ramcharitmanas”.
Previous theory
Exit to the topic
Next theory
Send feedback
Did you find an error?
Send it to us!