Bhakti Saints:
The Bhakti movement in India was proliferated by Bhakti saints who played a critical role in taking the tenets to the rural parts of Tamil Nadu. Some of the important Bhakti saints and their contributions are discussed below.
1. Adi Shankara/ Shankaracharya:
Born in Kalady, Kerala, Sankaracharya was a devotee of lord Shiva, making his followers believe in the “Existence of Soul”. 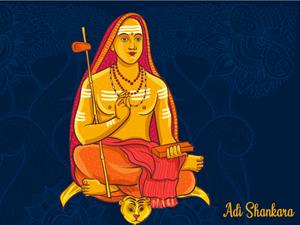 Shankaracharya
He was also credited for the revival of Hinduism across India when Buddhism was making inroads among the communities of India. All of his works are centred around logical angles.
Brahma Sutra Bhasya: This was a commentary written by Shankaracharya on Brahmasutra, a text of Vedanta philosophy. It is also believed to be one of the important works of Shankaracharya.
He also wrote many commentaries on Upanishads, Bhagavad Gita in Sanskrit. Nirvana Shatakam, a book on Stotra, was also written by Adi Shankara.
The Advaita Philosophy
The Doctrine of Advaita was propounded by Shankaracharya which states that the "One unchanging entity (Brahman) is real and the soul (Alman) unites with Brahman, a person who realizes this would attain "Moksha". It also says that there is no difference between the Atman and the Brahman hence the name Advaita means Non Duality".
He also went on to establish “Mutts/Mathias” in four corners of the Indian subcontinent.
Shankaracharya gave less importance to the Bhakti movement as he wanted to restore the glory of the Vedic tradition and the practices.
He was highly critical of the Mimamsa school of Vedic Philosophy and went on to explain the major deviating factors in Buddhism than in Hinduism.
2. Ramanujacharya: Saint Ramanuja
He was born in \(1017\), in Sriperumbudur, Tamil Nadu. He was a great devotee of lord Krishna and a follower of Vaishnavism. Ramanuja was also an influential philosopher and social reformer of the \(11^t\)\(^h\) century.
Yadava Prakash: He was a great scholar of Advaita Vedanta, who became the guru of Ramanuja.
Ramanuja propounded his philosophy, “Vishishtadvaita or qualified dualism”, which states that a plurality exists between the Atman and Brahman, that the soul retains its identity even after uniting with Brahma.
He was one of the most respected Acharya among the Vaishnavite sect and known as “Ilaya Perumal”.
Ramanuja was a social reformer who, in his last days, settled in Srirangam and fought against caste-based oppression.
Split in Vaishnavism:
During the later stages of the \(16^t\)\(^h\) century, the Vaishnavism sect witnessed a split due to regional differences and practices.
Previous theory
Exit to the topic
Next theory
Send feedback
Did you find an error?
Send it to us!