What is Human Rights?
Every individual is born free and has the right to a life free from the clutches of Slavery. The right of a human being is undeniable as every human is entitled to his or her rights. The history of human rights has been traced to the Persian kingdom, which was the first kingdom to grant freedom to the Slaves. 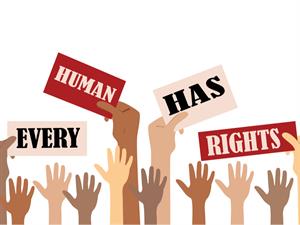 Human rights are universal rights that are innate, available to humans irrespective of their sex, nationality, religion, language, ethnicity or race.
They are believed to be the most fundamental rights that are essential for the existence of human life.
The Rights further make the life worth living as they include the right to education, food, life and liberty, free speech and freedom from slavery etc.
History and Human Rights:
The root of human rights can be traced from the ancient texts and artefacts. Some of the historical documents of Europe and America had laid great emphasis on Human rights, which led to the proliferation of the idea.
Some of the major documents and declarations which served as a base for Human Rights are discussed below.
1. The Magna Carta of 1215 (Britain):
The “Great Charter or the Magna Carta” was signed by the then king “John of England” in 1215 as he had violated many ancient laws of the land. He was forced to sign the Magna Carta by the people of the country. 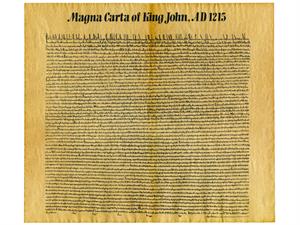 The 1215 Magna Carta
This incident was seen as the first instance and a precursor for the Constitutional law in England. It is also hailed as the important legal document that paved the way for Modern Democracy.
2. The Petition of Right (1628):
This petition was created in 1628 under the rule of Charles I by the English Parliament. The Parliament disapproved of the King’s unpopular foreign policy. Later the petition of right was initiated by “Sir Edward Coke”.
This petition personified the Civil Liberties of the people by enabling rights to the subjects.
3. The Habeas Corpus Act (1679):
This act was enacted in \(1679\) under the reign of Charles II who was restored as the king post the Civil war in England. The act went on to strengthen the ancient writ, which was a feature of English law even before the enactment of the Magna Carta.
It served as a safeguard of the liberty of an Individual, which prevents the authority from unlawful imprisonment of a subject.
4. The English Bill of Rights (1689):
It was enacted in \(1689\) by “Mary II and William III”, who went on to become the rulers of England post the rule of “James II”, whose rule was subverted. The bill had provisions of Civil rights.
More importantly, the bill was instrumental in establishing the Power of Parliament over the Monarch rule.
5. The US Declaration of Independence (1776): The US Constitution
The US declaration was authored by “Thomas Jefferson” who explained the reason for the declaration of Independence from Great Britain. It went on to establish the “Individual rights and the right of revolution”.
6. The Declaration of the Rights of Man and the Citizen (1789):
The Declaration of Rights of Man and the Citizen was pronounced by France in \(1789\), after the French revolution. It served as a safeguard of the liberty of an Individual, which prevents the authority from unlawful imprisonment of a subject.
7. The US Bill of Rights (1791):
These are the “First 10 Amendments” that were enacted to the US Constitution, which went on to limit the powers of the US government. It also protects the rights of the residents, citizens, and visitors of the territory.
Exit to the topic
Next theory
Send feedback
Did you find an error?
Send it to us!