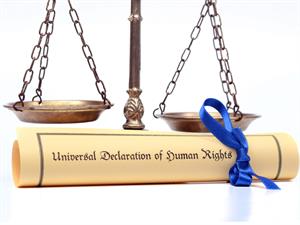 Universal Declaration of Human Rights
It was a watershed moment in the history of Human Rights as the UNDR was declared on December \(10\), \(1948\), in the Paris Assembly as a common standard for human rights (UNGA resolution \(217 A\)).
The Cyrus Cylinder and Human Rights
Cyrus, the great king of Greece, captured Babylon in \(539\) BC. He ordered the release of the slaves captured from Babylon and declared that all people have the right to choose their own culture and religion and thus establish equality.
The records of Cyrus were kept in Baked-Clay cylinder, which was given the name “Cyrus Cylinder”. These records served as the basic tenets of the Universal Declaration of Human Rights.
The Declaration proclaims human rights as the “Rights derived from the Innate Dignity of a human being”. It was also called the “International Magna Carta of Human Rights”.
This milestone document was created with people from numerous cultural, religious and geographical backgrounds who brought the plurality to the declaration.
UDHR: It is believed that the declarations had paved the way for the establishment of more than \(70\) human rights treaties to date.
The UDHR spells for the first time that the “Fundamental Human Rights” are to be protected Universally. The document had been translated into more than \(500\) languages.
UN and Human Rights: Statue of Eleanor Roosevelt
The United Nations has contributed immensely to the realm of Human Rights. Known for Championing the cause of Human rights around the world, the International Organisation had established a special Commission, namely the “UNHCR- United Nations Human Rights Commission”.
Eleanor Roosevelt: She was the first head of the UNHRC, who was also the wife of former US president Franklin.D. Roosevelt.
Most of the principles of UDHR are adopted in the Constitutions of approximately \(185\) countries.
Reference:
Statue of Eleanor Roosevelt - Cvandyke / Shutterstock
Previous theory
Exit to the topic
Next theory
Send feedback
Did you find an error?
Send it to us!