4. The Fall of Panchalamkurichi and The rise of Rebels.

The emergence of South India Confederacy:
BANNERMAN AND THE DOWNFALL OF PANCHALAMKURICHI
1. Major served an ultimatum to Kattabomman and ordered him to surrender before a particular date. Kattabomman did not pay heed, which angered the major who ordered an invasion to Panchalamkurichi.
2. He planned to attack the fort of Kattabomman, which served as a line of defence. He also arrested the minister of Kattabomman, Sivasubramani.
3. Vijaya Ragunatha Thondaiman, a confidant of the British company, captured Kattabomman from the forest and handed him over to the British.
4. Major Bannerman took his revenge on the Palayakkarar (Kattabomman) and his close associates by hanging them in Kayathar (a place in present-day Tuticorin) to instil fear among the public.
5. Right till the end of his days, Kattabomman lived like a brave hero to face any opposition, including death. The execution
The Rise of Rebels:
1.Velu Nachiyar:
A. Velu Nachiyar was born to a royal couple as their only daughter. She was raised like a true warrior and was well trained in archery, horse-riding, martial arts, etc.
B. She was married to Muthu Vaduganathar, the king of Sivagangai, at the young age of 16. In 1772, at the battle of Kalaiyar kovil, her husband was killed by the combined forces of the Nawab of Arcot and British company. 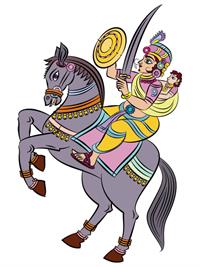 Velu Nachiyar
*FACT FILE: Veeramangai: Velu Nachiyar was considered to be the first woman ruler who fought and emerged victorious against the British. Hence, she was popularly known as the “Veeramangai (Brave Woman) and Jhansi Rani of South India”.
C. Post the death of her husband, she was given asylum by Gopala Nayakar in Dindigul for a brief period. During this stay, she met Haider Ali and had a cordial relationship with him. Haider, who was impressed with the courage of Nachiyar assisted her in the fight against the British.
D. Nachiyar planted a surprise attack against the British by gathering intelligence from her assistors and attacked British ammunitions. Later recaptured Sivagangai and extended her ruler with the help of the Marudu brothers.
*FACT FILE: Kuyili: Kuyili was the commander-in-chief of Velu Nachiyar, who carried out the suicide attack that destroyed the entire ammunitions of the British. This is considered as the “first recorded instance of suicide bombing in History”.
2. Marudhu Brothers:
The Maruthu brothers belonged to the family of warriors, where the elder one was Periya Marudhu, and the younger one was named Chinna Maruthu. Among the two, Chinna Marudhu was very much popular than his elder brother due to his activities. He was also known as Marudhu Pandiyan.
Both the brothers were well trained in native martial arts and the art of using ancient weapons, which enabled them to fight any enemy. Due to his courage and tenacity, Chinna Marudhu was fondly called the “Lion of Sivaganga”.

The Maruthu brothers
*FACT FILE: Valari: Valari or Valai Thadi is a weapon used in fights in ancient Tamil kingdoms and kings of South India. The Maruthu brothers are considered to be great exponents of this art.
In 1772, the Nawab of Arcot attacked Sivaganga and its ruler Raja Muthu Vaduganathar was killed, and then they captured it. The marudu brothers escaped the assault, which allowed them to regroup and come back stronger than before to recapture Sivaganga. The elder one, Periya Maruthu, was made the ruler.
Previous theory
Exit to the topic
Next theory
Send feedback
Did you find an error?
Send it to us!