The private sector in India:
The Indian economy is a mixed economy in which both Public and Private sectors exist. Even though the Public sector receives support from the government, the private sector can alter the country's economic course.
The Industrial Policy of \(1991\) paved the way for the opening up of the Indian economy, allowing equal space to private sectors.
Private Sectors: These are sectors owned and operated by private entities or individuals without any interference from the government. These sectors are assigned the task of developing consumer goods with a profit motive.
The formation of private companies can be done in two ways, they are:
1. Establishing a new private company.
2. Changing a public sector company into a private company.
Growth of the Private Sector:
Most of the investments in the early stages of economic development are concentrated in Public sector companies as they have the support of the government. 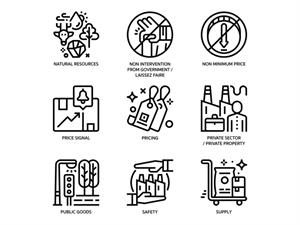 Private Sector
The paradigm shift was witnessed in the latter half of the \(20^{th}\) Century when investments in private sectors yielded profits in double-quick time. Hence, the investments in public sectors dipped considerably.
The contribution of the Private sectors in national production reached new heights simultaneously profits of the Public sector nosedived, which further pushed the stakes of the private sector higher.
Functions of the Private Sector:
The Dominance of Private sectors:
India, which started as an Agrarian economy, slowly shifted towards the Secondary (Industries) and Tertiary (Services) sectors that are dominated by private companies.
Still, \(67\%\) of the Indian workforce is dependent on Agriculture which contributes to almost \(30\%\) of India’s GDP being owned and managed by the Private sector.
The policies charted by the government to develop the Agri sector is been implemented by the Private sector under the able support of the Government.
Some of India's most famous private companies are Wipro, Infosys, Reliance, etc.
Previous theory
Exit to the topic
Next exercise
Send feedback
Did you find an error?
Send it to us!