2. The Ancient and Medieval Women

Women of Ancient India:
Women were considered an integral part of society from the beginning of the Indus Civilisation culture. Women goddesses were worshipped throughout the Indus culture.
They believed the world was formed in the womb of the mother goddess and worshipped other women goddesses among the male gods.
Status of Women during Early Vedic Age:

Swayamvara Ceremony
Women of the Vedic age enjoyed significant social positions and were treated on par with the men during the Early Vedic Period.
They were allowed to get an education and participate in assemblies like Sabha and Samiti. They were also allowed to acquire the knowledge of Vedas.
Sabha: It denotes the assembly hall where administrative actions took place. Women were also allowed to attend the Sabha during the early Vedic period and were prohibited in later stages. It also performed judicial functions.
Social evils like Child Marriage, Sati and Purdah system were absent during this period, and women were also allowed to remarriages.
Women enjoyed equal positions in a family with their husbands but were not allowed to inherit the property.
Swayamvara: In ancient Vedic literature, there were references regarding the right of women in the Kshatriya Clan to choose her husband, mostly who emerges the winner of a competition in a ceremony named Swayamvara.
Women in Later Vedic Age:
The later Vedic women saw the rigidity of the patriarchal society as their role was limited to being confined in the house, and they were not allowed to participate in public functions. 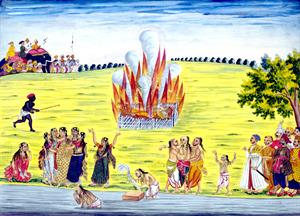 Sati
Denial of education and access to Vedic scriptures were some of the greatest agonies faced by the women of this period. To make their existence worse social evils like Sati gained prominence during the period.
Sati: It was a practice of throwing women into the funeral pyre of her husband against her will. This practice was prevalent in the later Vedic period.
The Medieval Women of India:
The conditions of Women further deteriorated in the Medieval period after the invasion of foreign powers who brought evil practices with them that they practised in society.
Treating women like slaves was another social evil that was highly prevalent along with Female feticide, Infanticide, Sati and Devadasi system.
Monogamy marriages became scarce as the practice of Polygamy rose among the wealthy people of the society, which further degraded the position of the women.
Polygamy: It was a practice of a man marrying more than one girl. This practice was highly seen among the Upper-Class people.
The Medieval ruler of the Mughal Dynasty, Akbar, who married the princess of the Rajput clan, fought for women's equality as he gave equal importance to his princess.
He opposed the practice of Sati and condemned the practice under his regime. The Rajput women followed a unique practice similar to Sati, called “Jauhar”.
The Chittoor Tragedy – \(1303\)
In the wake of Alauddin Khalji’s wrath, which decimated the Rajput army in Chittoor, pushing the women to the brink of fall, sensing defeat, they decided to perform their old custom of "Jauhar".
This practice means the sacrifice of their own lives by men fighting till death on the battlefield and women taking themselves into pyre in Chittoor fort (today it is known as Chittorgarh fort).
Despite the setbacks and debacles in the position of the Women in Medieval India, some managed to reign supreme amidst the Patriarchal dominance.
Some of the notable ladies of the Medieval period are Queen Durgavati, Velu Nachiyar, Begum Hasrat Mahal, Chand Bibi etc.
Reference:
Swayamvara Ceremony: Sanjaya in Kaurava Sabha / Wiki Commons
Sati: Sati ceremony / Wiki commons
Previous theory
Exit to the topic
Next theory
Send feedback
Did you find an error?
Send it to us!