6. The Fall of Buddhism

The Emergence of Sects in Buddhism:
The rulers who followed Buddhism convened many councils to proliferate the ideals and to celebrate the greatness of the Buddhist teachings. Each of the councils was headed by Buddhist scholars of that period. 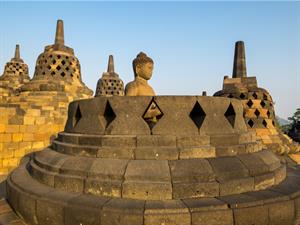 Kanishka inaugurating Mahayana Buddhism
History has witnessed “Four Buddhist Councils” which were convened in various timeframes under the patronage of various rulers.
Kanishka: He was the king of the Kushan dynasty and was a great patron of Buddhism who convened the “Fourth Buddhist council in Kundalvana (Kashmir), which saw the split of Buddhism into two sects.
Buddhism witnessed an evolution under the leadership of one such council headed by Nagarjuna, a Buddhist monk under the patronage of King Kanishka.
The Buddhist Sects:
The Buddhist monks of various regions started to adopt the different practices according to their region. This difference in methods led to the emergence of sects among Buddhism.
These sects are called as:
Hinayana Buddhism / The Lesser Vehicle:
The followers of Hinayana Buddhism believed in the original teachings of Buddha.
They prohibited Idol or image worship of Buddha.
Believed Self – discipline and Meditation can lead to the Salvation of Individuals.
“The followers of Hinayana Buddhism used "Pali Language”.
Strongly preached the concept that “Buddha will never be reborn”.
Theravada school of Buddhism was a part of the Hinayana sect.
Hinayana Buddhism contains “\(18\) sub-schools” which taught various tenets of Buddhism.
Mahayana Buddhism / The Greater Vehicle:
1. Mahayana Buddhism was known by the name because the ideals it adopted were liberal than Hinayana Buddhism. Kanishka patronised Mahayana Buddhism.
2. The Mahayana is a Sanskrit word” which means “Greater Vehicle’.
3. Believed that Salvation can be attained with the assistance of Buddha and the Bodhisattvas.
4. Worshipped the images of Buddha in Chaityas.

Place of Mahayana Worship
5. “Sanskrit Language” was used to propagate the ideals of Mahayana Buddhism.
6. Believed to have originated from the Northern parts of India and Kashmir, which later spread into Central, East, and South-East Asia.
7. Firmly believe in the concept of “Rebirth of Buddha”.
Reasons for the decline of Buddhism:
Some of the reasons for the decline of Buddhism are given below.
1. The Split of Buddhism into various schools like Hinayana, Mahayana, Vajrayana confused the people about their ideals.
2. Rise of corruption in Buddhist Sanghas and loss of sacredness of Monks.
3. The use of Sanskrit languages during the Gupta Period considerably reduced the patronage of Buddhism among common people as they found Pali language easier than the Sanskrit language.
4. An increase in Patronage of Brahmanism among the rulers put the position of Buddhism in oblivion.
5. Aggressive preaching of Hindu Saints under the rulers.
6. Invasion of Turks and other Arab forces completely vanished the ideals of Buddhism.
7. The emergence of Rajputs and Hun invaders.
The Ajivika Sect:
1. The Ajivika sect was a contemporary of both Buddhism and Jainism. The founder of the sect “Makkhali Ghosala” was a close confidant of Mahavira.
2. The Philosophy of Ajivikas revolved around that “Everything is pre-determined by fate”, and no human action can revert it. They rejected the Karma theory of Jainism.
3. It also stated that the cycle of life has to be undergone completely by the individuals to attain Nirvana or the High state of Bliss.
4. The followers of the Ajivika sect also practised the ascetic lifestyle by abandoning clothes and spending time in large pots for penance.
Patrons of Ajivika Sect:
This sect also had its own set of Royal patronage under the Mauryan King “Bindusara” (Father of Ashoka), which was later followed by his son.
Barabar Caves: These are the oldest rock-cut caves in India which are located in Bihar. It contains inscriptions of the Ajivika sect as Ashoka donated the cave for the Ajivikas to meditate.
Presence of Ajivikas in Tamil literature:
1. Ajivikas were also found in certain parts of South India, especially in Tamil Nadu. One of the earliest kingdoms of Tamil Nadu the Cholas were found to be levying a special tax on people belonging to the Ajivika sect.
2. There were also mentions about the doctrine of Ajivikas in some of the literary sources in Tamil, they are:
The Gana – Sanghas:
1. These are early tribal political setups that functioned as a parallel government other than the rule of the monarchs. The Gana – Sanghas are either a single clan political setup or the confederacy of multiple clan political setup.
2. The rule of the monarch is found in the Gangetic valley region, the Gana – Sanghas flourished independently in the Indus basin. People of the Gana-Sangha were treated equally in their society.
3. The people outright rejected the Vedic philosophy and Varna system, as Buddhism and Jainism were more popular among them.
4. Vajji and the Malla, which later became the Mahajanapadhas were once the independent Gana-Sanghas.
5. The Society of Gana-Sangha had only two-tier strata, namely:
Reference:
Barabar caves inscriptions of Ashoka - Wikimedia
Previous theory
Exit to the topic
Next theory
Send feedback
Did you find an error?
Send it to us!