7. The Origin of Kingdoms

The Rise of Janapadas:
The clan of the 6th century slowly began to merge to form big independent kingdoms under a king. This development of kingdoms also paved the way for the emergence of cities and towns.
The Vedic period saw the rise of Janapadas or major kingdoms. The period before the emergence of Janapadas had various tribes of the Rig Vedic period like Bharathas, Turvasas and Pasus, who were later replaced by Kuru and Panchalas, who went on to build the Janapadas.
Janapadas: This term was derived from the” Jana’s (people of the Vedic period kingdoms)” and “Pada means foot of the people”. Places where the Jana’s set their foot, are later known as the Janapadas.
The people of Janapadas mostly belong to the same clan, so their language and customs are similar. At the same time, the case was different with the Mahajanapadhas as it was a conglomeration of various cultures and languages, so plurality prevailed in Mahajanapadhas.
Mahajanapadas: The Buddhist text “Angutara Nikaya” speaks about the \(16\) Mahajanapadhas that existed during the \(6^t\)\(^h\) century.
Mahajanapadhas:
People of the Mahajanapadhas are stronger and affluent compared to the small kingdoms or the Janapadas. These Mahajanapadhas are \(16\) in numbers, which later went on to form Kingdoms.
The Mahajanapadas:
1. Magadha
2. Vajji
3. Malla
4. Kasi
5. Kosala
6. Anga
7. Kuru
8. Panchala
9. Vatsa
10. Chedi
11. Avanti
12. Gandhara
13. Matsya
14. Kambhoja
15. Assaka
16. Surasena
The King rule:
The emergence of Mahajanapadhas saw the beginning of battles among the various kingdoms for supremacy over territories. Kings performed various yagas like Ashvamedha and Rajasuya to strengthen their powers and gain an edge over their rivals.
The Kingdoms of Magadha, Avanti, Vatsa and Kosala were considered the most powerful among the Mahajanapadhas in the \(6^t\)\(^h\) Century.
Rajan: This was the name used for the ruler of the Vedic period, which was later changed as Samrat, Virat or Bhoja.
The Kings reigned supreme during the era of Mahajanapadhas. He also had groups like Sabha and Samiti, which assisted the king in the areas of policy-making, wars etc.
Satapatha Brahmana: These are Vedic texts dating back to \(300\) BC, which speaks about the King and his supreme power.
The King was ably supported by departmental heads, who helped the ruler in his administration. Some of the important administrative officials are:
1. Senani – Military general
2. Palagola – Court head
3. Rathakara – Maker of Chariot
4. Bhugaduga – Collector of Tax
5. Suta – Chariot driver
6. Gramani – Head of the Village
7. Takshan -  Chief Carpenter
The kings maintained regular armies to defend their Mahajanapadhas. The ruler collected taxes from his subjects.
Bhaga: These are \(1/6^t\)\(^h\) of the products which are taxed by the king from the peasants, craftsmen, herders, and traders.
The Magadha Kingdom:
The period of Mahajanapadhas had two types of governments one was the rule of Monarchs, and the other was the Gana – Sanghas which functioned independently. 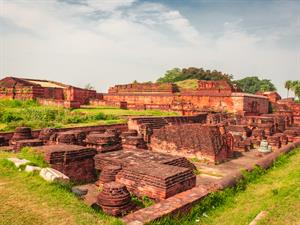 The Kingdom of Magadha
The Monarchs of the Mahajanapadhas aimed to consolidate the empire, which directed them towards the path of war.Mighty Mahajanapadhas like Kosala, Magadha, Avanti and Vatsa entered the battlefield to prove their supremacy.
Brihadradha: He was the founder of the Magadha empire, in the Gangetic valley with “Girivraja '' as its capital which was later changed to “Rajgriha ''.
Magadha emerged victorious among the other powers and thus established a new empire named the “Magadha Empire”. The position of the king became hereditary, supported by his ministers.
The Reign of Bimbisara:
1. Bimbisara was the first great ruler of the Magadha empire who belonged to the Haryanka dynasty (one of the dynasties that ruled Magadha). He used the policy of matrimonial alliance to capture the lands of Lichchavi, Punjab, Videhi and Kosala.
2. Thus, he exerted control over the lands of Gangetic valley. He also went on to defeat “Brahamadutta” the ruler of Anga, and annexed his kingdom.
Shrenik: This name denotes “Bimbisara” in a Jain text.
3. Bimbisara was a contemporary of Buddha and followed Buddhism. He was also the first king to have a standing army. His administration had “Gramani” who was the head of the villages, as the village was the smallest unit of administration under Bimbisara.
Bali: This was the land tax collected by Bimbisara during his reign, which served as an important source of income.
4. Bimbisara met his end in prison as his son Ajatasatru imprisoned him and let him starve to death.
Ajatasatru:
1. Ajatasatru, the son of Bimbisara, waged war with the Lichchavis, which extended for a brief period and ended in favour of him by which Ajatasatru expanded his territory. 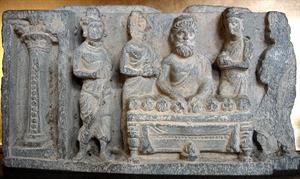 Carving of Ajatasatru
2. Ajatashatru’s reign witnessed the attainment of Nirvana by both Mahavira and Buddha. Ajatasatru, like his father, was a follower of Buddhism.
Patna: Ajatasatru established a fort in Pataliputra, so he is credited as the founder of Patna.
3. The capital of Magadha was “Rajgriha” which was surrounded by mountains from all sides which served as the natural barrier for their enemies.
4. The reigns of Magadha were transferred to the hands of various dynasties like Shishunaga and Nandas, who carried over from their predecessors.
Reference:
https://commons.m.wikimedia.org/wiki/File:EndAscetism.JPG
Previous theory
Exit to the topic
Next theory
Send feedback
Did you find an error?
Send it to us!