7. Money and its functions

The Role of Money:
Money plays a pivotal role in the life of humans right from its origin. It slowly became the deciding factor in terms of the economic situation and socio-political aspects of the country.
Money has been acknowledged as a universal mode of payment over the centuries. It is also the sole deciding factor in terms of purchasing power of an individual and for the country as a whole.
Money: The word 'Money' has been derived from the Latin word “Monet”.
Functions of Money:
Money also has other functions, which makes it a standard measure across the world. Some of the important aspects of money have been discussed below.
1. A Medium of Exchange: Money
Money has been universally accepted as a medium of exchange post the Barter era. It is considered one of the most important aspects of money. The pressing issues and negative aspects of the Barter system pushed the people towards embracing the new mode of payment in the form of money.
Money effortlessly eliminates the Double Coincidence of Wants and easily takes over the trade practices with ease of transactions.
2. A Unit of Account:
Money provides a common value for all goods and services present in the country, enabling the buyer and seller to come to terms easily.
When the value of goods is marked on the product, it eases the trade, thus giving a unit for goods.
3. A Store of Value:
Due to its easy availability and universal acceptance, money can be stored in banks and other financial institutions that can be later used to pay the debts of an individual and the companies.
The dwindling of values occurs only during Inflation, but otherwise, money retains its value for years
4. A Standard of Deferred Payment:
The term Standard of Deferred payment denotes that the money can be accepted as a debt repayment tool because it is a legal tender authorised by the Government.
The Correlation between Money and Prices:
The prices of the goods and services of a country and the money supply of a country are highly related to one another. The Price of the commodity depends upon the demand and supply of the particular commodity. 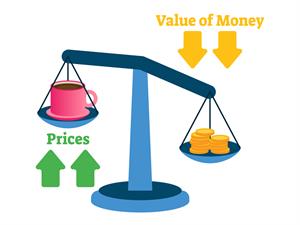 Inflation
Likewise, money supply plays a pivotal role in the prices of goods and services in a country. Lack of money supply hits the purchasing power of people, paradoxically increasing the money supply in the country decreases the value of the money, which in the economy is termed as “Inflation”.
Purchasing power: Denotes the ability of an individual to buy one unit of the commodity using a particular amount.
The Reserve Bank of India decides the flow of currency in India as it is the important authority that prints the currency and decides how much currency should be circulated among the public.
The purchasing power of a currency is decided by keeping the US Dollar as a standard value, as it is the most widely used currency among the countries across the world.
The purchasing power differs from one country’s currency to another country’s currency as it depends upon the value of the particular currency in International trade.
Previous theory
Exit to the topic
Next theory
Send feedback
Did you find an error?
Send it to us!