2. The Polity of Medieval India

The Rise of Islam:
The Islamic rule established its foundation in northern India post the “Battle of Terrain in \(1191\) and \(1192\)” which ended the last Hindu rule in North India. This Battle firmed up the Islamic empire, which constructed a mighty rule for the next five centuries.
Battle of Terrain \((1191-1192)\):  This battle was fought between Prithiviraj Chauhan and Mohammad Ghori in two successive years in which Prithiviraj won the first one in \(1191\), and Ghori won the final one \((1192)\) who left his slave Qutub-ud-din-Aibak in India.
The Islamic rulers began to control the maritime trade of the Western Coast, and the Merchant community of Arabs carried trade.
The Delhi Sultanates of North India:
The slave of Mohammad Ghori, Aibak, established a new dynasty named the slave or the Ilbari dynasty. The Sultanate contained five dynasties: The Slave dynasty, Khilji's, Tughlaq’s, Sayyid’s, and the Lodi’s.
The first great impact of the Sultanate rule was witnessed under the reign of Alauddin Khalji, whose rule witnessed the greatest reforms in polity and society.
Alauddin Khalji: The Real Architect of Khilji empire (\(1296 - 1316)\)
The Delhi Sultanate was consolidated under the rule of Alauddin, who expanded his territories from Punjab (against Mongols), Rajasthan and Gujarat.
He prohibited festivals and banned intoxicants and liquor, and also reorganised “Barids – spy services”.
Policy Of Tolerance: The predecessor of Alauddin, Jalaluddin, introduced the “Policy of Tolerance” which was reversed by Alauddin during his tenure.
After sealing the northern frontiers, he sent his deputy Malik Kafur to invade South India even up to Madurai in \(1310\).
The Tughlaqs:
The Tughlaq’s were the successors of Khalji’s who set their sights on the southern Indian provinces, which were relatively independent compared to the provinces of North India. 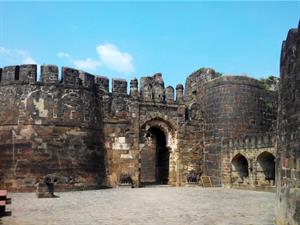 Daulatabad Fort
Mohammad-bin-Tughlaq, unlike his predecessors, wanted the entire subcontinent under his control.
Capital Shift: Mohammad-Bin-Tughlaq shifted his capital from Delhi to Devagiri (Daulatabad) to facilitate the extension of sovereignty in South India.
His reign witnessed the rebellion of Alauddin Bahman Shah, who went on to establish the Bahmani Kingdom, the first Muslim Kingdom in South India, in \(\text{1347 CE}\).
The Bahmani Sultanate in South India:
The fall of the mighty Vijayanagar empire witnessed the invasion of Bahmani Sultans to the southern territories who were ruling the northern parts of Karnataka and the Deccan area until then.
The Bahmani Sultanate reached its peak under “Mahmud Gawan”. He was a loyal servant to the kingdom of the Bahman Sultanate whose ideas and administrative methods bought huge laurel to the Kingdom.
He also served as a Prime Minister for \(20\) years under various sultans of the Bahmani Kingdom.
Gunpowder: Mahmud Gawan invited Chemists from Arabian countries to invent the formula of Gunpowder, which he later used against the Belgaum rulers of Vijayanagar.
Post his demise, the Bahmani Sultanate was split into five kingdoms, and the reign of Golconda and Bijapur witnessed the greatest economic and administrative reforms.
During the later periods, the Deccan Sultanates were captured by the last great ruler of the Mughal empire, “Aurangzeb”.
The Cholas of South India:
The Cholas reigned supreme in Medieval South India, who ran over the contemporary Pallava Kingdom and made the Pandyan Kingdom accept his suzerainty.

Brihadeeswara Temple
During the reign of Rajaraja I, the territorial expansion saw a great upsurge and reached its glory, which was also continued under his son Rajendra I.
Brihadeeshwara Temple: This temple was built by Rajaraja I under his reign in \(\text{1010 CE}\). It is also known as the “Tanjore Big Temple”.
His successor and son, Rajendra I, displayed his military might by capturing the lands of Sri Lanka, Kadaram (modern-day Malaysia), Java, Sumatra and Sri Vijaya (modern-day Indonesia).
Pandita Cholan: Rajendra I was a great patron of arts and literature and patronised many scholars, who gave him the “Pandita Cholan” title.
He also captured the lands of North beyond the Ganges, which earned him the title “Gangai Kondan”.
Previous theory
Exit to the topic
Next theory
Send feedback
Did you find an error?
Send it to us!