Introduction:
Post the advent and spread of various religions like Buddhism and Jainism, the change it brought significantly altered social, economic, and political conditions. This period which saw the emergence of various orders and invasions, had a special place in the history of India.
Indian history is divided into various periods, which marked the unique conditions of that period. From, were under the Mughal empire’s control, the \(\text{7th Century}\) to the \(\text{16th Century}\), the timeframe is termed the “Medieval period” of Indian History.
The Medieval period and the rise of new orders:
The Medieval period of Indian history holds a special place in the pages of history. This period witnessed gigantic changes which altered the existing conditions of the state.
Every region had its paradigm shifts which were absent till that date. A detailed view of the changes that occurred in various regions is stacked below.
The North India – Advent of Islam:
The fertile regions of northern highlands witnessed the invasion of Arabs and other Muslim dynasties from various West Asian countries, who established mighty empires and ruled India. Babur
The Delhi Sultanates are the first to establish a large dynasty in Northern India, which was ended by the Invasive Turks under Babur, who later established the Mighty Mughal empire in the \(\text{16th Century}\) post the Battle of Panipat in \(1526\).
Battle Of Panipat: The battle was fought in the year \(1526\), where Babur emerged victoriously. He was also credited for using guns in this battle which gave him the upper hand against Ibrahim Lodi.
Western India and the Rajputs:
The western part of India was under the control of Hindu kingdoms named the Rajputs, who are known for their Valour and Might. They stood firmly against the threat of Muslims and other invaders and defended their territories with vigour. 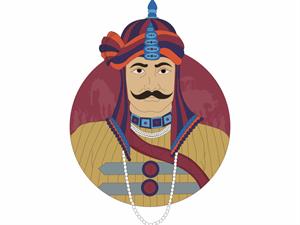 Rajput ruler
The Rajputs also battled the likes of Mughals and later had matrimonial alliances with them during the reign of Akbar. Hence the western part of India was mostly dominated by Hinduism.
Eastern India:
Most of the Eastern territories were under the Mughal empire's control, and some far eastern territories were taken hold of by small kingdoms, namely the Pala’s, patrons of Buddhism.
The South India – Cholas and the Vijayanagar empire:
The Cholas of South India under Rajaraja I expanded their territories up to the Northern Circars (Modern day Odisha), and under Rajendra Chola expanded up to modern-day Indonesia.
They also reigned supreme over their contemporaries Pallava and the Pandya’s. The fall of Cholas was followed by the ablest Vijayanagar empire, which rose to power after the fall of the Tamil Kingdom.
The Vijayanagar empire had a structured rule which was also seen as a power centre of religious rule.
The advent of the Europeans as traders in the \(\text{15th century}\) entirely changed the landscape of India.
Exit to the topic
Next theory
Send feedback
Did you find an error?
Send it to us!