Payal Gupta: When you are out at sea, teamwork is the most important in the middle of the crisis. Even during the storm when three people would be out on watch, the other three who would be inside wouldn’t be able to rest. Somebody would heat the water, the other person would heat the gloves because it was raining also. So team effort actually helped in navigating through the 20 hours long storm. I feel that if I had been alone then it would have been a nightmare to deal with the challenges that the sea throws at you.
Interviewer: Share your experience about the most challenging task while sailing.
Vartika Joshi: The Sea can get really tough when winds are picking up. Those are the times we have to be active and need to anticipate what could be there ahead. In the South Pacific, we encountered a storm where the seas were almost nine to ten meters high and the winds were picking up to 60–70 knots (a unit of speed equal to one nautical mile per hour exactly 1.852km/h), which is about a hurricane force of wind on land. It is normal on sea where there is hardly any land mass to stop the winds. It was also a blissful experience when something broke down and after a lot of hard work and effort, we were able to fix it together. We will remember these incidents as well because it gave us  the strength to move on and if something went bad, we were able to overcome those challenges.
Explanation:
Payal Gupta, another crew member, stated about the teamwork of the crew members. She stated that teamwork is the most important component in the midst of a maritime crisis. She stated that if three people were out on watch during the storm, the remaining three inside would not sleep. She also stated that while it was raining outside, someone would heat the water, and others would heat the gloves. They did it to protect themselves from the heavy storm and rain. These were some of the survival skills they learned during their training sessions.

Payal Gupta responded by saying that teamwork was the most important aspect of a sea voyage. Their cooperation and understanding enabled them to withstand the 20 hours of the prolonged storm. At last, she said that if she were alone and facing the difficulties the sea threw at her, it would be a nightmare for her, and she couldn't face it alone.

After hearing about the storm and how they managed to survive in the sea, the interviewer asked them to share the most challenging task they faced while sailing in the sea. Vartika Joshi then said that the waves would be terrible when there was a lot of wind in the sea. If such a situation arises, they should be very alert because anything will happen in the future. She then described an incident in which they were caught in a strong storm. She stated that they were facing a severe storm in the South Pacific. At the time, the sea waves were nine to ten metres high. 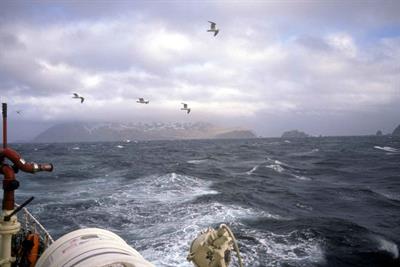 Severe storm at sea* (only for reference)
On the other hand, the winds blew 60–70 knots high. A knot is a metric of speed equal to one nautical mile per hour, or 1.852km. She also stated that the wind that blew in the sea was equivalent to the hurricane force of the wind on land. It was expected at sea because there was no land to block the winds. She also stated that they were thrilled when things broke down. The reason behind their statement was that they were able to fix it together after a lot of hard work and effort. She also said that these experiences gave them the courage to move forward. She also stated that they would remember those instances because they would overcome them with their experiences if something went wrong.
Meanings of the difficult words:
Reference:
State Council of Educational Research and Training (2018). Term-1 English Standard-10. Empowered Women Navigating the World (pp. 60-83). Published by the Tamil Nadu Textbook and Educational Services Corporation.
Severe storm at sea*: Angell Bob, U.S. Fish and Wildlife Service, Public domain, via Wikimedia Commons
Previous theory
Exit to the topic
Next theory
Send feedback
Did you find an error?
Send it to us!