Before studying the experiments of Mendel, it is better to know the below terminologies and symbols related to the topic of genetics.
Hybrid and types

Cross between pure-breeding pea plants
A hybrid is an organism formed by crossing two genetically distinct individuals.
Monohybrid cross
A monohybrid cross is a cross made between two organisms to study the inheritance of a single pair of alleles of a character. E.g., The cross between homozygous tall (\(TT\)) and homozygous dwarf (\(tt\)) forms is heterozygous tall (\(Tt\)) plants. The \(Tt\) plant is heterozygous for genes that control one of its characteristics (height). It is a monohybrid, and this cross is referred to as a monohybrid cross.

Monohybrid cross
Dihybrid cross
A dihybrid cross is a cross between two organisms made to study the inheritance of two pairs of alleles from two different genes. Genotype and phenotype
Genotype
A genotype is a collection of genetic information encoded in the genes of a cell or organism.
Phenotype
Phenotype is the result of the genotype interaction with environmental factors. It means the totality of all the characteristics and properties of the organism.
Selfing, cross, pure line, and Punnett square 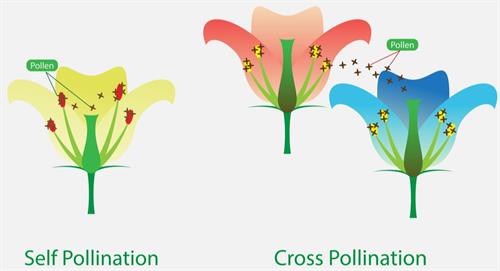 Self and cross-pollination
Selfing
The fusion of male and female gametes from a single genetic individual is known as selfing.
Cross
In genetics, cross results from breeding two parents with different genes, resulting in offspring with traits from both parents.
Pure line
A pure line is defined as an animal or plant with particular qualities passed down across generations as a result of inbreeding.

Pure line breeding between red and white flowers
Emasculation
Emasculation is the removal of the male sex organ. It is executed in plant breeding to remove stamens from a bisexual flower to prevent self breeding.