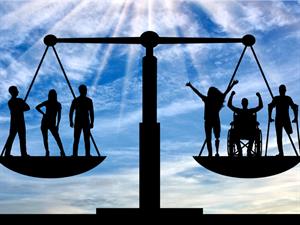 Equal Rights
This Clause helps the Citizens to enjoy equality before the law and equal protection of the law. The Constitution further states that these rights are enjoyed only by the citizens of India.
Equality before law: This concept of Equality before the law is an integral part of the “Rule of law” concept.
Any kind of discrimination like caste, creed, race, religion, sex, place of birth can be appealed in a court of law. Equal opportunities are awarded for the citizens in matters of employment.
2. Right to Freedom Human Freedom
The Clause of the Right to freedom bestows six basic rights that are essential for a dignified life of a human being. These rights protect the citizens only from the actions of the government. They are:
1. Right to Freedom of Speech and Expression.
2. Right to form associations, unions, and Cooperative societies.
3. Right to move freely throughout India.
4. Right to peaceful assembly without arms.
5. Right to practice any profession, or trade or business.
6. Right to settle or reside in any part of India.
3. Right against Exploitation
The rights against exploitation prohibit any kind of forced labour and trafficking of human beings. Any factory or Industry with hazardous pollutants employing a child under the age of 14 is a punishable offence under this provision. Empowering a Child
The term “Forced labour” implies that an employer is making an employee work against his will.
4. Right to Freedom of Religion
It enables an Individual to follow whichever religion he is inclined to. He or She can practice, Profess and Propagate any religion of their choice.
This right also has its limitations as it doesn’t allow a person to convert another person to his religion. “Forcible Conversions are Prohibited” infiltrates a person’s freedom of religion.
5. Cultural and Educational rights
The Constitution affirms the importance of preserving one’s culture and promoting it. This part mainly empowers the rights of the minorities present in the country.
They are entitled to open education institutions and administer their institutions according to the law of the land. The Government also promotes these institutions by funding them to nurture their rights.
6. Right to Constitutional Remedies
This part of the constitution plays a crucial part in the enforcement of Fundamental rights for an aggrieved citizen.
Dr. Ambedkar calls this part the “Most important part of the Constitution” without this; the Constitution would be null.
The Court of law issues “Writs’ (is a legal document that orders an entity or a person to stop acting) when any fundamental right has been violated.
Previous theory
Exit to the topic
Next theory
Send feedback
Did you find an error?
Send it to us!