Migration through the prism of Census:
The Census is a decadal practice (takes place once in \(10\) years) where the entire demography of a country will be measured in lengths and breadths. It provides nearly accurate data on the population and its behaviour on various fronts.
Migration was one of the core issues that can be enumerated with the help of the Census. There is no other live parameter to measure the influx of migration and the changes it brings along with it.
Census: The first complete Census in India was taken in the year \(1881\), under the leadership of W.C. Plowden, who was then the Census Commissioner of India.
The 2011 Census:
Currently, the data used by the Indian government to enact policies are based on the data acquired from the Census, which was taken in the year \(2011\). Post-\(2011\) no Census had taken place in India. India and Migrants
This Census had projected a clear picture of India regarding the population, their choices and the pattern of migration. Some of the data split by the Census had been discussed below.
Migrants: The migrants percentage in India has increased from less than \(30\%\) in the \(2001\) Census to \(37\%\) in the \(2011\) Census. About \(45\) crores Indian people are found to be “Internal Migrants”.
Maharashtra has attracted more migrants in the western part of India than any other state, which displays the shift in migration pattern among the people as they head towards cities, which in the economy is termed as “Urban-to-Urban Migration”.
Who is a Migrant?
According to the Census Authority, “If an individual is enlisted in the Census from a different place other than his birth place, he/she is considered as a Migrant”.
Illegal migration is a serious threat to the national security of India. Most of the illegal migrants are from Bangladesh who enter India through the Porous borders into the states of Assam and the other North-Eastern States.
The State of Kerala is receiving more migrants from the Northern state of Bihar, states the Census \(2011\).
\(64\%\) of the migrants are internal migrants, that is, people who move from one state to another in search of livelihood.
Major Reasons for Migration: 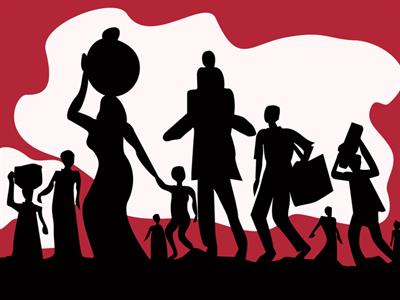 Migration of a family
Migration takes place within the country due to various reasons. Both men and women have their reasons for migration.
Women: The phenomenon of Migration was high among the women of India. The recent Census data of \(2011\) indicates that \(70\%\) of migration happened among Women of India.
Among Men the Most common reason for Migration is “Employment Opportunity” and among Women were “Marriage”.
The \(2011\) Census states that around \(49\%\) of Women migrate from one place to another due to marriage.
Previous theory
Exit to the topic
Next theory
Send feedback
Did you find an error?
Send it to us!